On March 2012 I gathered my yarn and began crocheting an afghan from a little booklet called “Farmhouse Crochet”.   I was newly enthused with granny squares and completed almost half of the squares.   And then I stopped.  Years passed.  Late last year, when I was organizing, I looked at my completed squares and partial skeins and decided it was worth finishing.  And I did!   But there were some challenges along the way. 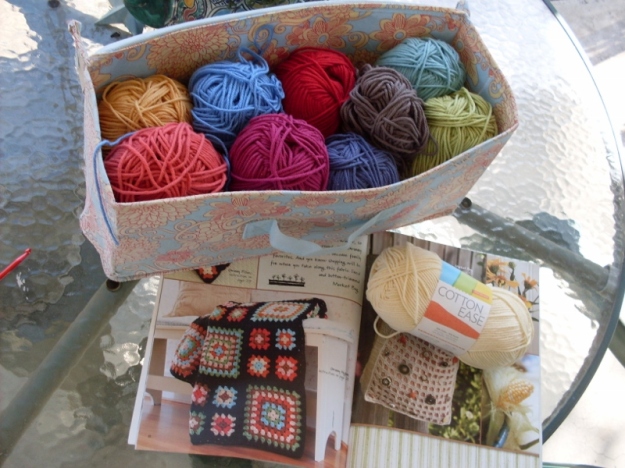 To get going again, I sat down and made first rounds ten at a time.  Slowly but surely, I added to my pile of squares, crocheting while watching TV.  Then my yarn started dwindling, and I worried about running out.  I did a quick search and discovered that almost all of the colors I used are discontinued.  I didn’t want to shorten the afghan so I continued, using every last bit. I even found tiny balls of a few colors that I had saved from when I knitted sweaters with them.

The squares alternate with big squares and four small squares sewed together into a square.  When I was running out of yarn, I changed 2 big squares to little squares because I didn’t have enough of any one color for the long rounds.  I also had to substitute some cream Sugar’n Cream yarn and fisherman color Wool-ease from my stash for the background color when I ran out.  You can see I used the last bit of yarn in the two squares below, not quite having enough to finish the round.  I think it gives it character, although these little details are hard to find when looking at the afghan as a whole. 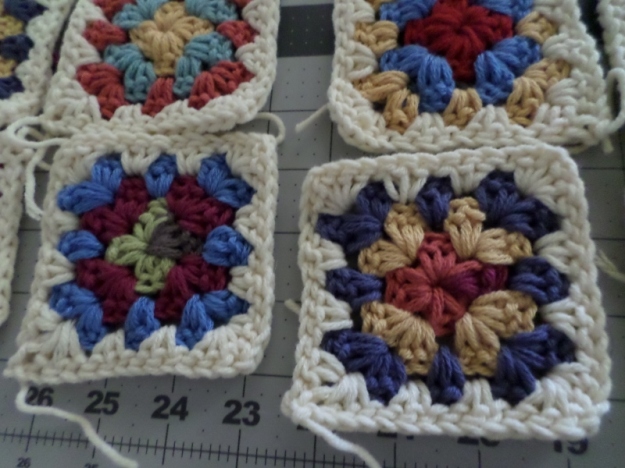 Sewing  the squares together by whip stitch took several days.  I had already combined the four squares and weaved in most of the ends as I went, so that helped.

Why was this project stalled for so long?  I realize that when I ran out of steam back in 2012 I wished I had chosen a different pattern and one or two colors.  The only time I had a pleasant time continuously crocheting was at the end when I crocheted a border around the whole thing.  It was just too much stop and start, and endless ends to weave in.

Whew!  I’m glad to cross this off my list!  I’ve known how to crochet since I was a teenager yet this is the first afghan I’ve ever completed. 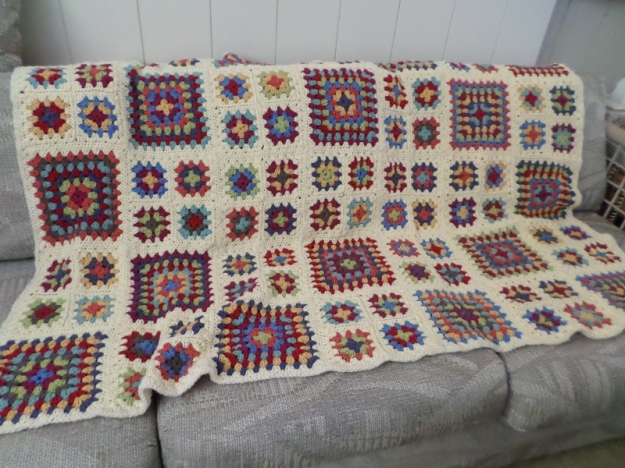 And the obligatory cat on afghan pic:

I had to improvise and change that up a little, too!

Do you have a long term unfinished project that you are still interested in completing?