The board game, Monopoly, will be retiring its thimble token this year.  Does that mean hand sewing is “out”?  I don’t use a thimble for most of my hand sewing, but it is essential for hand quilting.

Quilting magazines were always available at my neighborhood grocery stores and drugstores.  During the past year I’ve noticed they no longer stock them.  I think that’s not because quilting is no longer popular, but much of the focus for patterns and fabric has shifted to the online marketplace.  I would guess that my location, a big city in southern California, is also a major factor why these quilting magazines aren’t selling enough to be carried.

One drawback to making quilts is it’s expensive in comparison to making clothes. Much more yardage is needed for all the coordinating fabrics, backing, and batting.  But that’s also the fun part of quilting – playing with different fabric combinations.

A year ago I bought a set of 20 fat quarters of Civil War Reproduction fabric called Peace & Unity.  Time to decide on a pattern and get to work!

I liked the quilt on the cover of the December 2005 issue of American Patchwork & Quilting that I bought at a used book store.  It features sawtooth star blocks set on point alternating with a yellow print fabric.  The quilt is dated circa 1900 and is titled Vintage Stars.

Besides the fat quarters for the stars, I would need various shirting fabrics for the background part of the blocks.  It was hard for me to settle on the fabric for the alternating squares, and I still might change it if I decide I don’t like how it looks.  Budgeting is a factor; I bought 5 yards of the gold print for $10. Although the print reads like a solid from a distance, it has cross hatching in a slightly darker shade of gold.

Because many of the fat quarters were dark and deep colored fabrics I pre-washed them as a precaution.  They are high quality fabrics and didn’t bleed at all.

The star blocks in the magazine pattern are 7 inches.  I made sample 7, 8, and 9 inch blocks before deciding on an 8 inch block.  I decided on a 8 inch block partly because of the size of the quilting rulers I own, and also because I wanted to make my flying geese with this Amy Smart, of Diary of a Quilter, tutorial of a no-waste method of making four flying geese units at a time.  There is no formula for a 7 inch block using this method.

The flying geese measurements have a little extra so they can be cut to the correct size after sewing them.  For the 8 inch blocks they are 2 1/2 by 4 1/2. 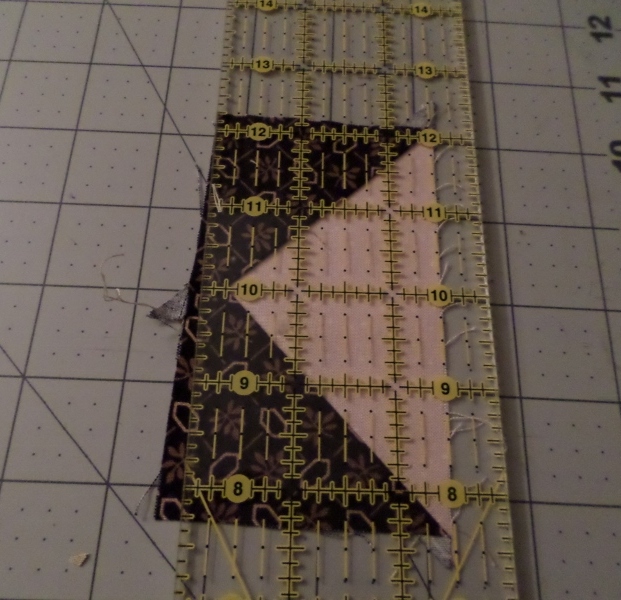 Sewing 1/4 ” on either side of center pencil line

geese starting out as hearts

Although this is not a hard block to sew, my sample blocks were still 1/4 inch off, either bigger or smaller on one side.  This isn’t a block that can be cut to dimensions at the end, because this would cut off the points.

I took care with the following steps  in order to get a uniform size:

Any thoughts on quilting?  Are quilting magazines still carried in your neighborhood stores?