Let’s start with the oldest one from my collection.  It doesn’t have a date on it, but I am guessing it dates from the 1950s or early 1960s.  It features a cute cover, illustrations of a prettily dressed young miss, and a cartoon format to the instructions. 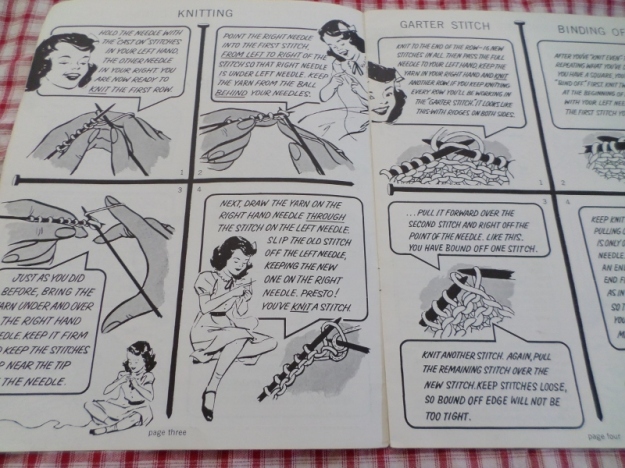 The back cover shows a few simple projects.

Wait a minute – what is that?  A creepy face on the back of her kerchief!

What was the designer thinking?  Well, we need some kind of embellishment to make the hood appeal to the younger set, and what girl wouldn’t want eyes on the back of her head.

I first learned to knit and crochet in 1973 or 1974, and I still have the little booklet from the class.  Those faces on the yarn are  actually cute.

One of the projects: 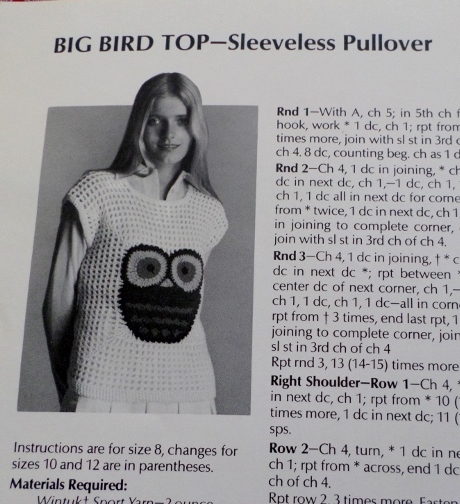 Owls were very popular in the 70s, but I’m thinking maybe that’s not the best placement for the owl eyes.

The Gitche Gumee Headband is another groovy design from the same booklet, although it’s neither knit nor crocheted.

I  also have a few early 1970s copies of a knitting and crochet magazine called 101 Sweaters.  Seventies fashion wasn’t just ponchos –  although the hairstyles and makeup are dated, many of the patterns hold up well. 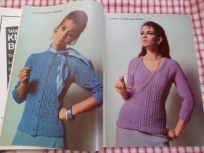 The magazines also have a section for men’s patterns:

That wraps up a look at the good, the bad, the ugly, and the weird knitted and crocheted patterns and fashions of yesteryear. Do you like to collect old patterns or make things from them?