Who doesn’t like the excitement of winning something for free?  I remember as a young child my mother used to call in to radio contests and won several times.  I love sewing blog contests, and have entered many times before.  Well, it’s finally paid off, as I have  had the pleasure of winning not one, not two, but six patterns from the generous and talented sewist, Samina,  of “Sew Everything Blog”.  Thank you, Samina, I love them all, but want to explore my thoughts on two: Simplicity 2927, a Fashion Runway pattern, and Simplicity 2554. 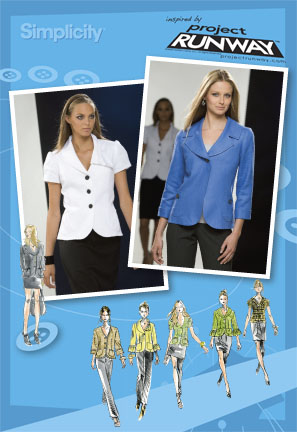 I have a limited collection of patterns, and have never looked at a Project Runway pattern before.  They have a feature with fashion illustrations called a croquis.

Besides the usual line drawings, you can dress up the model in different variations of an outfit like playing with a paper doll.

I’ve never done any fashion drawing.  When I look at the line drawings of a pattern I usually know right away which view(s) I would be interested in wearing.

Simplicity 2927, pictured above, has a interesting shape with seams curving into the pocket area.  I like the peephole neckline with the button.  I try to avoid tops with a zipper, which this pattern has, but with a functional button maybe I could omit the zipper.  I notice quite a few patterns for tops have zippers, while none of my ready to wear ones do.  They either have buttons or are put on over the head. On looking at the makes of this pattern on Google, I saw several versions with piping.

Let’s take a  look at the line drawings for Simplicity 2554, pictured above. I would make view D with modified, streamlined short sleeves, and E without the sleeves, so it would be like F but with the short ruffle  instead of the ruffle coming down over the bust.  I looked on Google images for the pattern number and mostly saw makes of view F.  I think the elongated ruffle would be too much on me, but I suppose it depends on how fluid the fabric is.  This pattern has some views meant for knits and some for wovens which would be confusing, except that Samina already wrote on the envelope whether the view was for a woven or knit.  I love notes on second hand patterns! View F was designed for wovens but I saw many makes of F in a knit.

What do you first do when looking at a pattern?  Do you use Pattern Review or just Google them for the photos like I did?  Writing this, and trying to think of various options, caused me to try Flickr which also yielded good results.